Laser treatment is on everyone’s lips in the course of skin tightening. But not all lasers are the same. Especially not with the advancing technology. Some very few beauty studios in Germany already use the PicoWay Resolve (picosecond laser) as a weapon against skin aging. This laser works differently than conventional devices. This is because it applies very targeted and extremely short laser impulses to the skin. At Era Esthetic in Frankfurt I tested the innovative procedure for TwoTell.

What is PicoWay Resolve

According to the description, this is a so-called fractionated laser that can operate at two different wavelengths. In addition to skin tightening, it can also be used to remove pigment spots or acne scars. This laser causes a tiny injury directly under the skin surface, i.e. between the second and third skin layers.

This is supposed to stimulate the skin to self-heal and create elastin and collagen – real anti-aging killers that come from within. What makes the picosecond laser so special is that it works more gently and effectively than any other laser and without downtime! So far the theory which made me very curious.

A thorough cleaning is carried out before the laser treatment.
Of course, despite all the forecasts, I am sceptical at first when I enter the rooms of Era Esthtetic. Here everything seems very bright and friendly. And from then on I’m in the hands of Kathrin Futschik, the head of the Centre for Aesthetics and Laser Medicine in Frankfurt. After the clarification she cleanses my face and covers my eyes to protect them from the the laser.

For the next 20 minutes she shoots the laser through my skin surface. That sounds worse than it is. It’s a bit unpleasant, but not really painful. The laser handpiece looks like a longer pen. It actually only stings in the areas where my small pigment disorders are treated. And: it feels very warm. It is not really pleasant, but bearable.

After the laser treatment

In fact, my skin is glowing tomato red afterwards which scared me a little but I was able to cover it with put make-up. In the evening everything was back to normal.

After the laser treatment the skin is bright red.
But only in the more intensive pigment areas did the skin peel a little afterwards. The week after the treatment, as recommended by Kathrin, I refrain from sauna, sports and direct sunlight. A direct change cannot be seen immediately, because the collagen formation by the PicoWay Resolve only starts after about 3 weeks. In other words: the skin works from the inside and will continue to do so for a few months. By the way, three treatments are recommended every 4 weeks in order to achieve an optimal skin booster effect. My schedule allows me to book the trio package. And after a few weeks I notice the first positive changes.

My skin is actually visibly younger.

I am truly very satisfied with the results of the PicoWay Resolve treatment.
Small wrinkles appear to smooth on their own. And the hyper pigmentation spots are also greatly reduced. All this happens little by little which Kathrin from Era Esthetic had predicted.

Above before – below after. A clear improvement!
So you really need some patience, but it’s worth it. The same is also true for scars or stretch marks. I had a small scar on my thigh which was greatly improved. PicoWayResolve is a very innovative procedure that convinced me. The effect comes slowly, but it comes from the body’s own substances, which I think is great. Because it looks natural! And nothing is visible from the outside, I had no downtime, which would have been the killer in my job.

Blog posts about other skin rejuvenation methods can be found here. 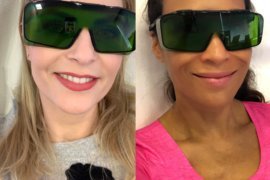 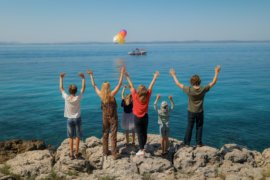