I admit that I was quite sceptical when I booked a canoe trip for myself, my husband and our two kids (4 and 9 years old). A mum I am friends with told me that it was totally chaotic when they went to try that out. We were absolute beginners as well. But I can tell you that much: it was great! But one thing at a time. I had booked a canoe group tour through Kreuzberg at Canoa Berlin. Each canoe can take four people, if neccessary two kids and three grown-ups. Besides us another three boats took part. I chose the three and a half hour Kreuzberg tour to explore the alternative Berlin. We started at Urban harbour and paddled along Maybach shore. But for the first 20 minutes I barely caught a glimpse of the multi cultural life right and left of us. Because we just couldn’t handle steering our canoe. My husband sat all the way in the back, me at the front, the kids in between. Mina (4) basically permanently broke with the paddle, Nicolas paddled on an off and I (to be honest) also not the whole time because it was simply too exhausting and one-sided. No wonder our „captain dad“ was frustrated and irritated. After the second stop (where the guides informed the participants about knowledgable stuff concerning Berlin’s history and its districts and told nice anecdotes) we were asked if we were so happy with our line-up. I had to laugh hard as of course we were not. But it was really polite to ask us as we were already paddling for half an hour chaotically from left to right as the bottom of the group. But then Pedro – one of the team leaders – joined us in our boat and everything changed. He took over steering and all of a sudden we kind of floated effortlessly. My kids were fascinated to see how a watergate was filled so we could pass it. We continued on the river Spree past popular sights such as the Oberbaumbridge, the Badeschiff (a boat on the river which is actually a swimming pool) or the former border control facility from the time when Berlin was still divided into West and East. Even as a Berlin citizen it was fascinating for me to view Berlin from that angle.By the way: we also paddled through the legs of the Molecule Men (a 30 m high sculpture in the water). People that kiss exactly at that spot are meant to stay together forever. My husband and I sat so far apart, though, that we didn’t manage ist ;-)) After three quarters of the tour we made a stop at a beer garden and the rest of the time just flew by. The four of us really enjoyed being active in fresh air and to experience so much. My sore muscles reminded me a bit longer of the beautiful trip… 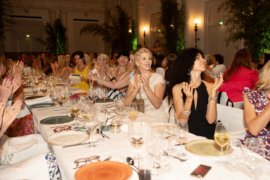